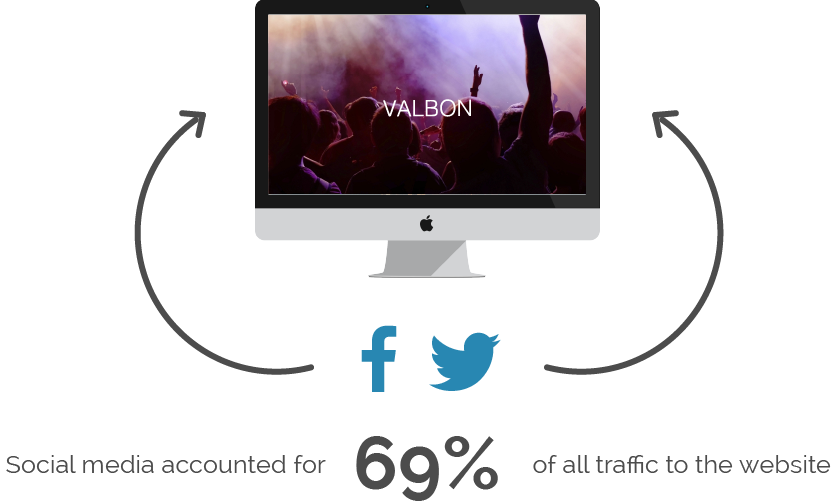 After being an important part of Hull’s nightlife for over 20 years, Pozition nightclub realised that they needed to rebrand. They were attracting a young demographic, aged between 18-21, and needed to begin attracting a more mature audience. Valbon wanted to retain their current customers but they needed to launch a new concept designed to attract an older demographic; one that would enjoy food during the day and come in for cocktails in the evening.The freshly named Club Valbon needed to promote the new look venue, offers and products, as well as continuing to promote the club to their current, younger demographic.Airship proposed to manage the Club Valbon social presence across the Facebook and Twitter platforms for an 8 week period. By increasing the overall interaction on all social channels we were able to produce a return on investment from social media across the business. We also produced impressive database growth, website click-throughs and engagement statistics.

How did Airship achieve social growth?

Airship implemented a social listening platform that allowed us to track the social influence of customers who engaged with Club Valbon on Facebook, Twitter & Instagram. We were also able to monitor leads and competitors; searching out conversations that we could engage in about Club Valbon products.

Why did this help?

Club Valbon were struggling to dedicate enough time to driving their social presence - they needed support to utilise their minimal resources effectively. Our key objectives were:

How effective was Airship's strategy?

During the 8 week period, social media accounted for 69% of all traffic to the website.Based on an average conversion rate of 20%, we delivered over £4,000 of pre-booked revenue for Club Valbon during the 8 week period.Additionally, we saw an increase in Facebook and Twitter followers during the period.Twitter impressions increased 1,526%, going from 20,700 to 336,600 - exactly what was required for a new brand to establish their name in the region. On Facebook, we increased impressions by 180%, from 225,917 to 632,466. This was done by producing relevant and regular content, designed to maximise Club Valbon’s organic reach.Encouragingly, Club Valbon also saw an increase in engagements with their posts, with a 293% increase in post clicks, 274% increase in reactions, 233% increase in comments and 152% increase in shares.Interested to see more of our work on social media? Click here to read more about how we proved an 18:1 ROI for Living Ventures!